I was selected to share some of my experience with MongoDB at MongoSV.

“MongoSV is an annual one-day conference in Silicon Valley dedicated to the open source, non-relational database MongoDB. The comprehensive agenda includes 50+ sessions covering topics for both the novice and experienced user, with presentations from 10gen engineers as well as MongoDB users.” 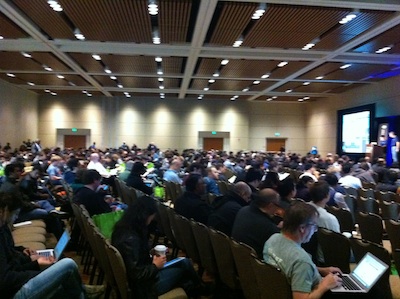 I’ve been to a few other similar MongoDB events in NYC and DC but this was the largest by far. There were over 1,000 attendees and 5 tracks plus whiteboard and birds of a feather sessions.

As freeing as a document store is, there’s still work to be done in designing how you’ll store and retrieve your data. It’s super-easy to get up and running without giving this much thought but you will need to design your documents eventually. There were at least 3 sessions about schema design during MongoSV.

The new aggregation framework is great, highly anticipated, and much needed. During the Keynote, Eliot Horowitz demonstrated an application built on MonogDB that used the Twitter API to capture tweets related to the day’s events. The demo site ran throughout the day and was used in a contest to see who tweeted the most about the conference and who was mentioned most. The source code for the app was subsequently made available on github. Check out Chris Westin’s presentation on MongoDB’s New Aggregation Framework.

My presentation, ”MongoDB at CustomInk - Adoption, Operations, and Community”, detailed some of the reasons we decided to go with MongoDB, the challenges we faced bringing it into the organization, how we’re using it in production today, lessons learned, and some of our future plans. I also covered some of the operational considerations for putting MongoDB into production: how do we deploy, operate, and monitor MongoDB. I also described CustomInk’s involvement in the MongoDB community.

You can catch a video of my presentation on the 10gen site or just checkout the slides below.

It was great to meet Kenny Gorman from shutterfly and share some of our experiences with MongoDB. shutterfly and CustomInk have a lot in common. Of course, both are online retailers but some other things that we share include:

Of course, there are plenty of differences, too. shutterfly is publicly traded and larger than CustomInk.

It was interesting to see how shutterfly’s approach to adopting MongoDB is very similar to CustomInk’s. Both store product data in MongoDB but order data lives in relational databases.

Using MongoDB on Amazon’s AWS was, not surprisingly, another hot topic. I think that if either shutterfly or CustomInk were to launch their business today, they’d likely look to AWS, or something similar, to house their infrastructure. The truth of the matter is that in 1999 that simply wasn’t an option so neither company stared there. At CustomInk, we have started moving some of our production services out of the data center and into alternate hosting environments (managed hosting or “the cloud”). However, the real sweet spot for us with AWS, at the moment, is staging and test servers. With AWS, we have the ability to quickly, easily, and inexpensively spin up a separate environment for each development branch.

The “developer happiness” that MongoDB affords does not make it immune to the “operational considerations” that every platform must take into account. These considerations vary from one environment to the next (bare metal, vm in a data center, managed hosting, “the cloud”, etc.) Application that are not built to take advantages of the strengths of each environment will eventually suffer the consequences of running there. Those consequences may include downtime, poor performance, and/or lots of operational complexity.

Other videos and presentations

Check-out all of the presentations from the conference on the 10gen site.

The conference also included the announcement of the MongoDB Community Award winners. But that’s a story for my next post.